The Silence of Accuracy, Speed and Reliability :

The Pan, Tilt, Zoom camera represents an irreplaceable device in the arsenal of security devices, but until recently the mechanics of a PTZ motor traditionally relied on conventional belt and gear drive systems of a style that had been used for decades.
Then JVC launched the VN-V685 and VN-V686 Series of PTZ cameras using Direct-Drive motors, and a sea-change occurred in PTZ capabilities and reliability.
In designing the Direct Drive mechanism, JVC engineers were seeking to overcome a number of fundamental problems inherent with the orthodox belt-drive systems, namely:

Through innovation based upon years of experience JVC was able to take a hint from the mechatronics technology that controls VTR tapes, specifically the way an editing machine's motor freely controls fast forwarding and rewinding. This mechanical technology can work smoothly at any speed. JVC has excellent know-how in professional editing machines, as is well known with the development of commercial VTRs. Development took about three years, dating from the idea stage. Speaking about the design process, lead engineer Mr. Atsushi Yamashita recalls : “For some parts, we were able to take advantage of the merits of VTR control mechanism as is, but developing the control part and building in precision tuning so that we could stop the pan / tilt motion at exactly the right point was a real battle. Essentially, motors are very good at continuous rotation at uniform speed and can turn at very high speeds, but stopping is their weakness. In order to realize a preset position function, however, which is to be expected on a PTZ camera, it was crucial to be able to stop instantly in the correct position. Achieving that is what led us to the successful development of the Direct Drive mechanism.

The VN-V686 series has achieved stopping control within ±0.03°. With the stepping motion you get with an existing gear-and-belt driven PTZ, you can't get precision any better than the amount of movement in one step. In general you can't do better than about ±0.1°. Just looking at this difference in specifications, I think you can tell that precision of ±0.03° is a great advance.”

The results of the innovation involved in the VN-V686 Series Direct Drive PTZ systems represent a total triumph over the basic limitations and inherent weaknesses of traditional belt-driven systems, and can be witnessed in the performance specifications :

What this all means to the user and integrator is peace of mind – a JVC PTZ camera is simple to install, and reliable in operation. Furthermore, the consistent accuracy of the Direct Drive motor means that once a series of preset patrol positions have been programmed, they will not need to be adjusted after a few months of use, as is the case with conventional belt-drive systems, which tend to “drift” over time. Less headaches and inconvenience for both operator and integrator. 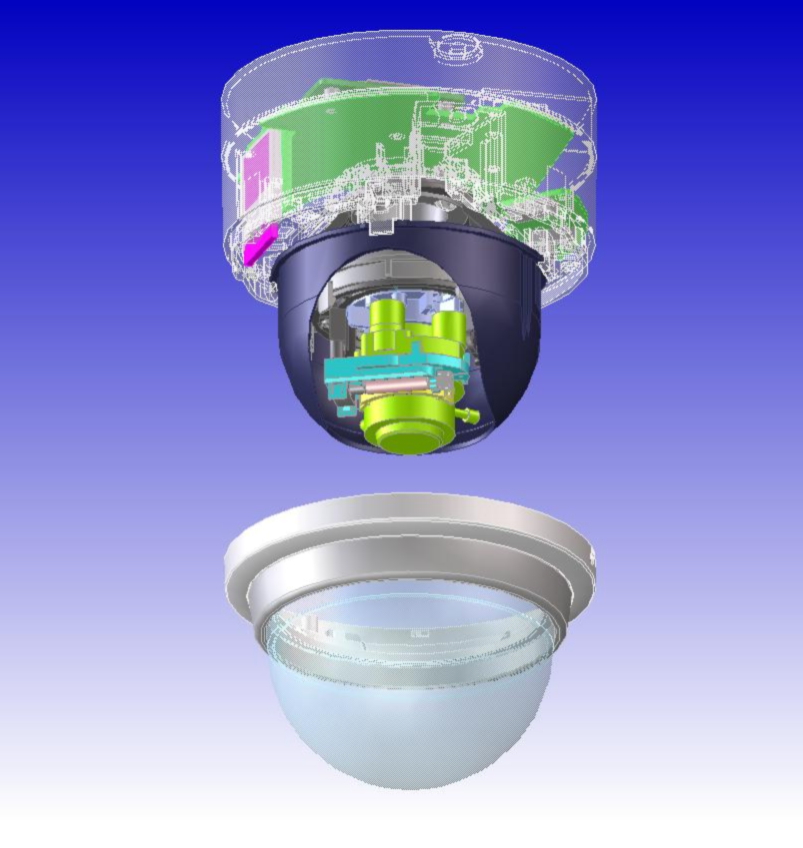